The store will not work correctly in the case when cookies are disabled.
Your company account is blocked and you cannot place orders. If you have questions, please contact your company administrator.
Please refresh this page to improve your experience.
Top
Skip to the end of the images gallery 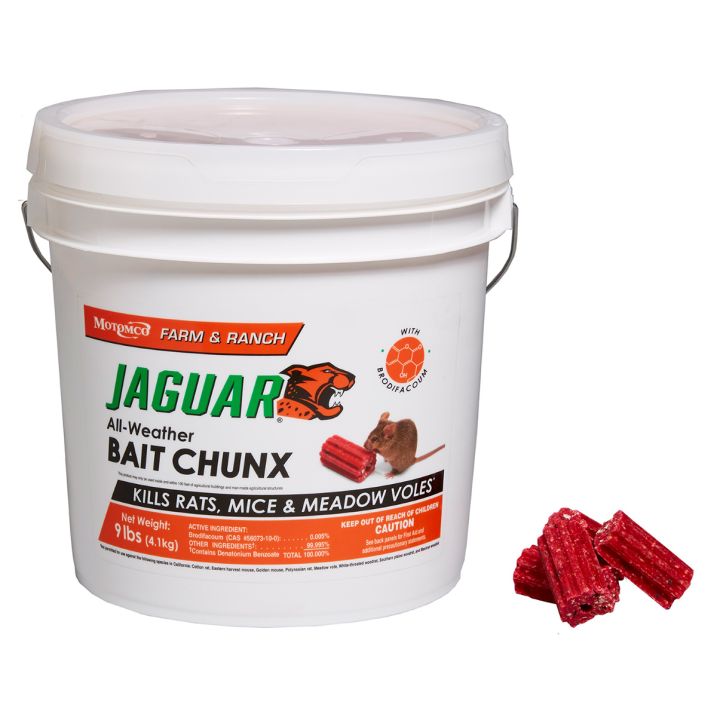 Especially successful in cleaning out tough rat and mice infestations, Motomco Jaguar All-Weather Rat Bait Chunx is just what you need when warfarin resistance is suspected. Mold and moisture-resistant, bait chunx can kill rats and mice in a single feeding.

Contains Brodifacoum, the strongest single-feeding anticoagulant available. For use in and around agricultural buildings only. Each Chunx weighs 20 grams.

About the Active Ingredient: Brodifacoum is a highly lethal vitamin K antagonist anticoagulant poison. In recent years, it has become one of the world's most widely used pesticides. It is typically used as a rodenticide but is also used to control larger mammalian pests such as possum. It is characterized as a "second generation" or "superwarfarin" anticoagulant.

Brodifacoum steadily decreases the level of active vitamin K in the blood. Vitamin K is required for the synthesis of important substances including prothrombin, which is involved in blood clotting. This disruption becomes increasingly severe until the blood effectively loses any ability to clot.

Q: If used in a chicken house, can the eggs be affected by the poison?

Yes, if the birds consume any unprotected bait or a dead rodent it can affect the eggs.

Ask a question about this product:

Write Your Own Review
Have you used this product?
Customers Also Bought
Customers Also Viewed
Saved for Later View Saved Items
You have no items in your list.
Login Create Account

Compare Products Compare Now
You have no items to compare.